The epic series that’s been compared to the works of Robert E. Howard (Conan the Barbarian) concludes…

Canisius descends into the underworld to demand that Pluto, the god of the dead, tell him how he can rid himself of his lupine curse. But there Canisius also learns that Lucius plans to give Lavinia the same curse. Reliving the legend of Romulus and Remus, Canisius must confront his former brother-in-arms and save both the city and the woman he loves.

Get this and the initial three issues of Empire of the Wolf now at comiXology! 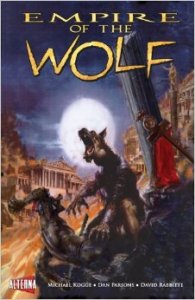